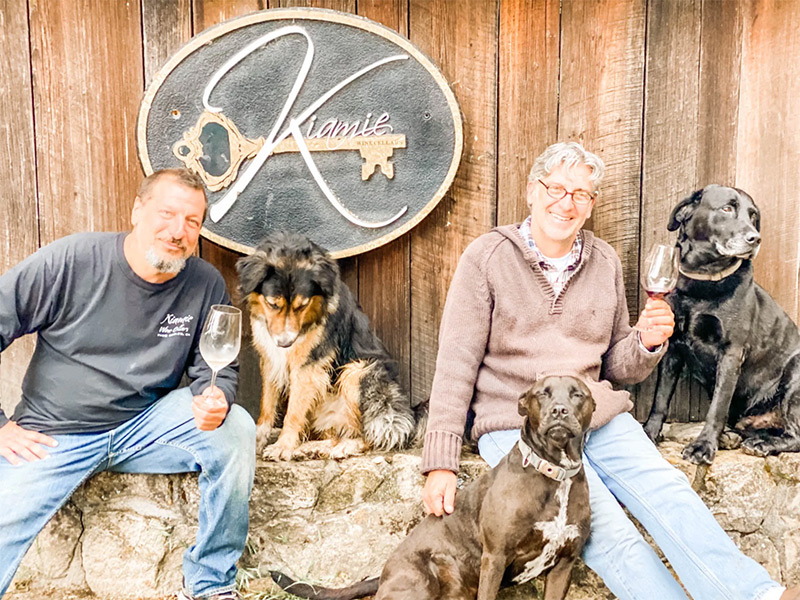 Kiamie Wine Cellars is a collaboration between two guys with diverse, yet complementary backgrounds. While living in New York City, Aram Deirmenjian and Greg Johnson always shared a history and enthusiasm for wine.

Aram grew up working in his family's vineyards, spending every summer helping with the harvest.

Greg, an heir to the Kiamie Real Estate throne in New York, spent his lifetime drinking fine wines and working over a decade retailing wine at one of New York's top-selling wine shops.

Together, Aram and Greg compliment one another's backgrounds and realized their dream of developing a fine California winery.... named after Greg's mother's maiden name, Kiamie.

Aram and Greg share a vision: to create truly distinctive blends not limited to a predefined wine style, but instead made from the best fruit Paso Robles has to offer.

The grandson of New York real estate mogul Sam Kiamie, Greg Johnson first became interested in wine while in college where he worked in one of New Yorks's finest wine shops. He immersed himself in the world of wine, refined his palate, and learned all he could about retail sales. His family eventually convinced him to join the family business in Manhattan, but he continued to work in the wine shop on the weekends.

After a few years, Greg realized that the wine business was truly his passion, and after discussing it with his friend Aram who grow up in California they began formulating a plan to start their own winery.

They discovered Paso Robles after ruling out Napa Valley and Mendocino, and Greg took up a job driving grapes from Paso Robles up to Napa for VitaLuce. He met Steve Glossner at Halter Ranch while picking up grapes, and they spent hours together discussing wine and the business in general.

Aram Deirmenjian comes from a family with a 50-year history of California grape growing and grew up working in the vineyard. After attending college, he left California for New York working in project management for a division of Honeywell. He eventually established his own Life Safety Systems firm. Business boomed after the events of 9/11, but his life outlook changed simultaneously, as did his wife Patti’s, and they looked outside the city for a less stressful lifestyle.

An apple farm in Vermont seemed to be the perfect answer, so Aram sold his share of the firm to his partner, and he and Patti made plans to leave New York. During this time, Aram’s client and good friend, Greg Johnson of the Kiamie family, came to them with a plan to move to California and start a winery.  They realized that their end goal of a better lifestyle would still be met, Aram could draw on his early vineyard experiences, and they'd be closer to family.

Greg and Aram traveled all over California and happened upon Paso Robles when driving from Aram’s family’s vineyard to Napa Valley. Aram was surprised to see a thriving town and wine industry where he remembered only a highway interchange before. They decided this was the place, packed up, and moved to Paso Robles. In order to get a new hands-on understanding of the business, Aram took a job at Halter Ranch. He worked in the vineyard with Mitch Wyss, in the tasting room with Leslie Wyss, and in the cellar with winemaker Steve Glossner.

Aram is now fully enjoying living in California and is working hard to put Kiamie Wine Cellars on the wine industry map as a premier Paso Robles winery.